In keeping with the evolving population of the United States, the White House recently put forth a p...

In keeping with the evolving population of the United States, the White House recently put forth a 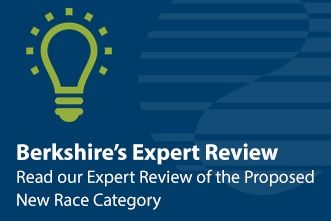 proposal to include a new race on the 2020 Census form. This new race would be Middle East and North African (MENA). This subgroup has been reported as part of the ‘White’ race since its designation in 1944. This was initially considered positive for this subgroup, as they were eligible for citizenship under laws in effect at that time. Now, many members of the community feel as though they do not fit in with White, Black, or Asian designations and support the new designation.

This proposed change prompted discussions here at the Berkshire offices about how often the races used on the census form change. Many of our consultants recalled the changes to the occupational codes that occurred in the transition from the 2000 Census data to the 2006-2010 American Community Survey data, but the reported races were the same. We found that the 2000 to 2010 report was the first time since the 1860 Census that the race codes did not change. The races reported on the form were the same from 1790 to 1850, and then the reported races changed every 10 years until 2000.

Another interesting item is that for each census until 1950, the census worker determined the race of each reported person. The 1960 Census was the first time that residents reported their own race, and at that time four categories were reported: White; Negro; American Indian (consisting of Aleut, Eskimo, and American Indian); and Asian (consisting of Chinese, Japanese, Filipino, Hawaiian, and Part Hawaiian). 2000 marked the first time residents could check more than one box in the race category. An excellent summary of the races reported in the U.S. Census from 1790 to 2010 is available here.

This change is still in the proposed stage, so no action is needed until it is final. If approved for the 2020 Census, it is unclear if or when federal contractors will need to update their race self-ID forms to include the new race category. It also remains to be seen if employers will be required to use the new race category when summarizing their workforce on annual EEO-1 Report filings. The Equal Employment Oppurtunity Commmission (EEOC) last revised the racial and ethnic categories used on the EEO-1 Report in 2006, when it changed the report to allow for reporting of individuals who identified with more than one race, among other changes. OFCCP currently allows employers to use the seven race/ethnic categories on the EEO-1 Report when preparing affirmative action plans (AAP). Perhaps Office of Federal Contract Compliance Programs (OFCCP) will capitalize on this pending change to update the race groups in the AAP regulations, which still report the five categories used in the 1990 Census data. In the meantime, the Office of Management and Budget will be sifting through the 1,200+ comments on this proposal. Stay tuned to Berkshire’s blog for any updates.