A final rule implementing Executive Order (EO) 13838 was issued this week by the Wage and Hour Divis... 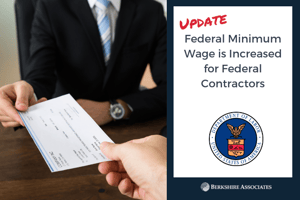 A final rule implementing Executive Order (EO) 13838 was issued this week by the Wage and Hour Division of the Department of Labor. EO 13838 provides exemptions for some federal contracts that were established under EO 13658 “Establishing a Minimum Wage for Contractors.”

EO 13658, which was issued in 2014, raised the hourly minimum wage for certain workers performing work on covered federal contracts to $10.10 per hour in 2015, with annual inflation-based adjustments. The order is applicable to a procurement contract for construction covered under the Davis-Bacon Act (DBA); a contract for services covered under the McNamara-O’Hara Service Contract Act (SCA); a contract for concessions, including any concessions contract that the Department’s regulations at 29 CFR 4.133(b) excludes from the SCA; or a contract with the Federal Government in connection with federal property or lands and related to offering services for federal employees, their dependents, or the general public. Further, this minimum wage requirement applies only when the Fair Labor Standards Act (FLSA), the SCA, or the DBA governs the workers’ wages. As of January 1, 2019, the rate is $10.60/hour.

Under EO 13838, exempt contractors no longer have to pay a minimum wage of $10.35; they can instead pay, at least, the higher of either the Federal minimum wage of $7.25 or any applicable state or local minimum wage. It is important to note that this is specific to the type of work included in the exemption. Therefore, a contract could include both exempt and covered services, and the covered services are still subject to the minimum wage provisions of EO 13658. EO 13838 does not change a contractor’s obligations under the FLSA, SCA, DBA, or any other applicable law or any record-keeping obligations.