After the first round of comments, OFCCP recently published revisions to proposed updates to the sch... 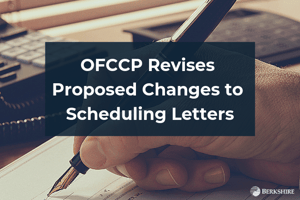 After the first round of comments, OFCCP recently published revisions to proposed updates to the scheduling letters, opening another 30-day comment period before any revisions will be finalized.  OFCCP originally proposed changes to the scheduling letters in April with comments received through June 11. The revisions incorporate changes made as a result of comments to the initial proposals, several coming from Berkshire Associates. Comments from the public for these versions are due by July 29.

OFCCP’s current scheduling letters expired on June 30th. However, the letters currently used will receive a month-to-month extension until the Office of Management and Budget (OMB) approves the new letters. Therefore, audits initiated over the next few weeks (including those locations on the recently published CSAL), will be conducted under the existing letters.

While Berkshire is still digesting these changes, we are pleased to see that OFCCP has reconsidered some of its earlier recommendations.  Below is a recap of what has changed.

The OFCCP had requested sweeping changes to this letter, including analyses by individual race/ethnicity, providing pools of candidates for promotion by race and gender, providing the contractor’s most recent compensation analyses, and updated data for each completed month if the AAP was greater than 6 months into the plan year. Thankfully, these requests have been eliminated in this version of the letter, as we requested in our comments.

What still exists is the request that the contractor provide copies of the three largest subcontracts related to the federal work completed by the contractor. This would be required only if the subcontract value is at least $150,000 and not due to expire within 6 months of receipt of the letter. In Berkshire’s response to the original proposal for this data, we believe that this will be an additional burden on contractors that OFCCP has not taken into consideration.

The revised letter contains most of the same requirements as the previous proposed changes. Items that remain the same are written versions of all three AAPs and examples of postings with the state employment service. The difference between the original and this revised proposal is that OFCCP is only requesting examples of reasonable accommodations rather than the contractor’s reasonable accommodation log, with an indication of if the request was granted or denied.

The revised letters for these reviews also remained relatively unchanged from the original. These focused reviews will require:

As previously reported, OFCCP announced that they will perform 2,500 establishment reviews, 1,000 compliance checks, and 1,500 focused reviews each year. The number of focused reviews is expected to increase from 500 in 2019 to 1,000 in 2020, to 1,500 in 2021. Coupled with the potential AAP verification, the contractor community is on notice that audits are on the rise and it’s important to have plans in place as close to the plan date as possible.

If you have questions about the proposed changes, or how best to comment, feel free to contact your Berkshire Consultant. Be sure to subscribe to this blog for future updates.